Anyone who kayaks in San Francisco Bay knows that you should always try to paddle with the current. If you were paddling to Point Bonita from Horseshoe Cove you would plan to head out with the ebb and paddle back with the flood. (See Tides and Currents). In both directions, your course is parallel with the current: its only effect is to increase your speed over the sea bed. When paddling across a current however, it is important to understand the effect the current will have on your course: simply pointing your kayak at your destination will not suffice. The first three examples all assume that the current flows at a constant 2 knots across the width of the channel.

The kayaker at A wishes to paddle directly across the channel to B where the BASK potluck picnic is already underway. The paddler maintains a constant heading and comfortable paddling speed of 3 knots, but the current carries the kayak across the channel to land at C, 200 yards downstream from the food. The kayaker decides to walk the 200 yards of rocky terrain to the picnic carrying the delicious but melting chocolate desert, since to paddle 200 yards upstream from C to B against the current he/she would have to paddle an additional 600 yards, because for every 3 yards forward, the current would push the boat 2 yards back.

This time the paddler alters course towards the destination every 50 yards, realizing that the current is pushing the kayak downstream. Note that three quarters of the way across the channel, the kayak is heading sufficiently upstream that the current is no longer carrying it downstream and the boat moves perpendicularly across the current to land at D. If the kayaker had decided to paddle all the way to B, he or she would have paddled a total distance of 540 yards - because the last 50 yards would have been parallel to the shore with the current pushing the boat 2 yards back for every 3 yards paddled forwards.

Finally, the paddler selects a ferry angle that will carry the kayak perpendicularly across the channel from A directly to B. Note that although the kayaker appears to be paddling "uphill" into the current and seems to be aiming far to the left of the desired destination, the resultant course takes the kayak directly to the picnic. Note also that although the distance paddled is longer than the previous two examples, the total distance (and therefore time), is shorter.

In reality, the current in a channel tends to be strongest near the center where the water is deepest and slower in the shallow water near shore. In this example, the paddler estimates that the average speed of the current across the width of the channel is about 2 knots. Using the same heading as example 3, the kayak's course is initially west of the intended route. But as the current increases, the kayak is swept downstream. Maintaining the same heading and the same speed, the kayaker paddles on until, as the current recedes, the kayak again begins to make more westerly progress until it reaches its destination.

Here's a practical example of how a ferry angle can help you get to your destination. Imagine you've kayaked over to Angel Island. It's a hot day, and you fall asleep on the grass at Ayala Cove. When you awake you are alone. The fog has rolled into Raccoon Strait, your cell phone is dead and you hear the sound of the fog horn as the last ferry leaves. Uh oh.

But you're a BASKer and always prepared for the unexpected. Out of your emergency dry bag you take the pocket size tide log that Ken Mannshardt is always handing out. You check the date: Saturday Aug 21st 2004. You paddled over on the weak 2.7 knot max. flood at 2:47pm. It's now nearly 7:00pm, one hour before sunset, and two hours before the 3.9 knot max. ebb at the Golden Gate. Using the information in the Current Differences From The Golden Gate table, you estimate that right now there's a 2 knot ebb out in Raccoon Strait and it's increasing. 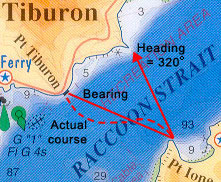 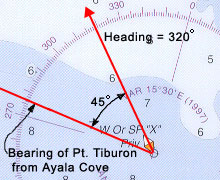 Digging into your emergency dry bag again, you take out your deck compass and your laminated chart of San Francisco. Using the chart's compass rose and a straight edge, you estimate the bearing of Point Tiburon from Ayala Cove to be about 275°, an almost perpendicular crossing of Raccoon Strait. From example 1 above, you realize that if you were to paddle on a heading of 275° you would be swept past your destination and in the increasing currents you'd be lucky to end up in Richardson bay. You recall from example 3 above, that if you paddle at a comfortable speed of 3 knots, in order to cross a 2 knot current at right angles, you need to head into the current at about 45°. Adding 45 to 275 gives you a heading of 320°. This is the heading you will keep on your compass as you paddle across the strait.

As in example 4 above, in the slower inshore currents, your heading initially takes you north of your intended course. (The dotted line represents your kayak's actual course). But out in the middle of the straight, the increasing ebb sweeps your boat south-west, but you continue to paddle on the same heading of 320°. As you approach the Tiburon peninsula (still unseen in the fog), the slower current allows your kayak to make more northerly progress, back towards your theoretical course.

Suddenly the fog thins and you can make out a rock wall in front of you. Knowing that your course took you towards Point Tiburon and that Sam's Restaurant is to the west, you confidently turn left and paddle alongside the breakwater until the fog clears and you see the ferry terminal ahead. [Note: if you ever have to make a crossing through fog, there's always a chance that you'll miss your destination. If it's an unfamiliar landfall, how do you know if your destination is to the right or the left? Instead of plotting a course directly to your target, always aim to one side (preferably the upstream side) of your destination. When you reach the shore you know which way to turn your boat.]

Note: These words, like many nautical terms have multiple meanings. In the context of this article, the following definitions are used.

Bearing—The horizontal distance measured in degrees to an object. (Example: the jetty was at a bearing of 45° to the bow of the boat. Or, the bearing of Point Tiburon from Ayala Cove was about 275° [from magnetic north].)

Course—The path of the kayak across the channel bottom (or sea bed).

Eddy line—The interface between the main current and the counter current.

Ferry—The act of paddling into a current so that the course of the kayak remains constant in the desired direction.

Ferry angle—The required heading that will carry the boat across the current in the desired direction.

Heading—The direction that the boat is pointing measured in degrees relative to north.

Ranging mark—A prominent feature of the landscape. Two ranging marks, one near, one far, when lined up, can be used to keep you on course.

Back to Technical and Gear