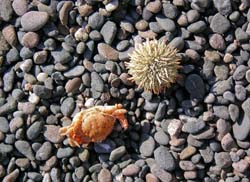 One of the most appealing aspects of sea kayaking is the ability to check out areas of the coast that no one else can get to. Here in Northern California it is our wonderful privilege to access untrodden nooks and pocket beaches and to cruise rocky shorelines.

This privilege, as with all privileges, carries with it some serious responsibilities. In general, the more remote and fragile the environment, the more vital it is to leave it exactly as we find it. This applies to encounters with marine mammals and birds, and anytime we land, especially when camping.

Much has been said about the importance of not altering the behavior of marine mammals, especially hauled out seals that need to rest undisturbed to conserve energy. Due to pollution over-fishing and global climate change, the ecosystem is already stressed. This is so even in apparently pristine areas like Point Reyes or the Mendocino coast. Each little disturbance is just one more barnacle on the whale's back. I have noticed that seals seem more disturbed by the silent approach of a kayak than by a noisy motor boat. If we are changing their behavior we are too close.

We should also try to avoid flushing shore birds for the same reason, especially in areas that get more than a little kayak traffic. Again the cumulative effect of repeated flushing is an energy drain and as well as a disturbance to feeding. We are barging into these critters' kitchens.

Landings can be another source of disturbance. On mud flats such as those found in Elkhorn Slough or Drakes Estero, we are disturbing the crust of algae and benthonic (bottom-dwelling) organisms just by dragging our kayaks across them. Try to pull out in areas that are already disturbed or to lift while pulling out to avoid breaking the delicate crust. Be careful to avoid pulling out in or stepping in tidepools, especially at low tide when they might be less obvious from the sea.

If we camp near a stream, we should take particular care to avoid disturbing the beds and banks of these streams as they are often anadromous fish habitat, another ecosystem which is already heavily degraded by human activities.

As things currently stand in Northern California, there are a few areas where camping is permitted only with a permit, areas where camping is prohibited on private lands, and a large "gray zone" where you can camp as long as you keep a very low profile. Most undeveloped areas of the Northern CA coast fall into the latter category. I have camped casually on the Lost Coast, the San Mateo coast and the Big Sur coast without difficulty. It behooves those who do this type of camping to practice low to no impact use. This means not clearing the ground cover, not cutting trees or branches, not making fires except maybe small ones below the high tide line, cooking on stoves, and carrying everything out that you brought in. 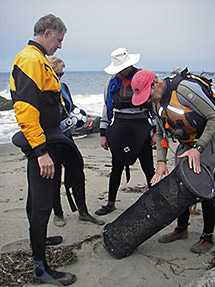 Everything includes human solid waste. The National Park Service recommends that where facilities are not provided, you should pack out all human waste where possible. Rather than carry a portable toilet, I have found that scooping it up with some sand (I carry a small plastic trowel) and containing it in a small zip-lock bag which is then placed in a larger zip-lock bag works well. When back in civilization, dispose of the waste in a toilet or outhouse, not in the trash (except for the plastic baggy itself). If you are unable to bring out your waste, dig a hole at least 100 feet (a foot is roughly the length of your foot!) away from campsites and water sources. Bury the waste at least a six inches underground so that it does not uncover easily and will decompose quickly. Burn or pack out all toilet paper.

Check out this infographic on how to both reduce plastic pollution and save water. If you are already a BASK member, check out the Coastal Cleanup page for information about how you can contribute year-round to coastal cleanup efforts.

I don't have to caution against littering, but if possible, we should try to pick up whatever debris washes on shore (see photo) so that the site is left cleaner than we found it. If we all follow these guidelines and practice good stewardship and good sense, we will continue to benefit from the relatively unfettered access we currently enjoy. If we call attention to our presence either through damage or though being obtrusive, we will lose this precious privilege.