San Francisco Bay area weather is famous for changing quickly. One area may have gusty winds while the rest of the bay has moderate breezes. When wind funneling through the Golden Gate opposes an ebb tide, it can create steep, chaotic waves that require advanced paddling skills. In the summer, fog banks rolling through the Golden Gate can spread over large areas fast—faster than you can paddle. Northwest winds often strengthen drastically in the afternoon, making the paddle back to your put‑in a challenge.

Outside the Gate, and particularly on the open coast, ocean swell—and the surf it creates—are also key concerns.

Always check the weather forecast before putting in, even if you checked it the night before, and don’t be surprised if actual conditions are different than forecast. If you will be going out the Gate or on the open coast, check swell and surf forecasts as well. (Swell is easier to predict than weather; forecasts for the height and direction of ocean swells are fairly reliable.) Be prepared with a fallback plan in case conditions are worse than expected. You may want a fall‑forward plan as well, in case they are better than expected!

How to Check the Marine Weather Forecast

A marine weather forecast differs from a land forecast; it emphasizes wind, waves, swell, and fog, and it provides warnings such as Small Craft Advisories. 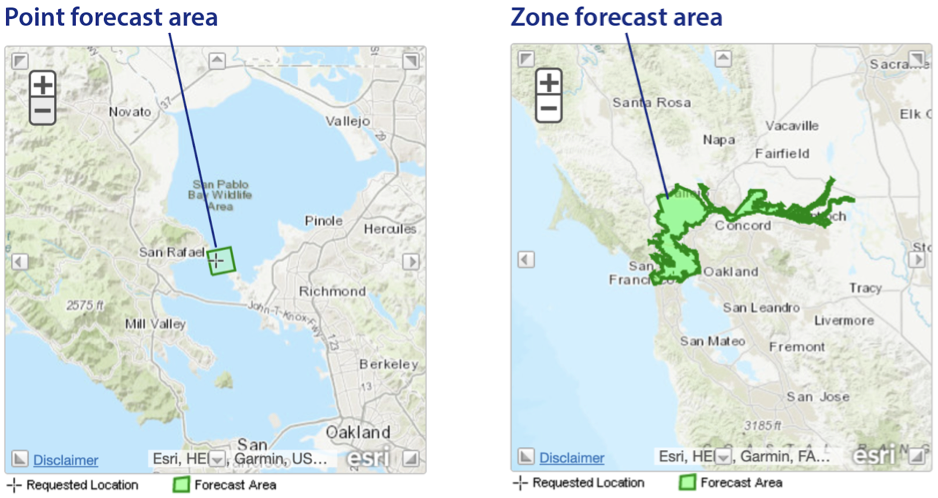 One way to check the NOAA marine forecast is via the National Weather Service, weather.gov. After zeroing in on the general area you want via the map or the city/ZIP code search box, click or tap on the exact area where you will be paddling. If you click on water, you get a marine point forecast. The weather.gov page also gives a link to the corresponding zone forecast.

The hourly weather graph. If you scroll down in the browser interface for a marine point forecast (or click on “Additional Forecasts and Information” on your phone), you’ll find the useful Hourly Weather Graph, which gives hour-by-hour forecasts for wind, swell, and wind waves.

Windy gives the big picture for wind. The app and website Windy (windy.com) give a visualization of what the winds are doing on large and local scales, along with a forecasting slider. Unlike a NOAA forecast, it lets you see the whole pattern, helping you to understand and predict local conditions.

How to Check Swell and Surf Forecasts

If you’re heading out the Gate or onto the open coast, you should check the swell forecast as well as the weather forecast. Some useful sources of information are the NOAA marine forecast (which lists swell where applicable), surf forecasts for relevant beaches, ocean swell models, and data buoys. Local knowledge is also valuable, and ultimately you will use your own eyes.

How to Interpret Surf and Swell Forecasts

Here’s an example of conditions from the Magic Seaweed Marin County forecast:

Primary versus secondary swells: Swells originate where storm winds blow over the open ocean, and they can travel for thousands of miles, gradually losing height. Thus, a forecast will often list two or three swells. In the winter in our area, the primary (most prominent) swell often originates from somewhere in the North Pacific and thus has a westerly or northwesterly direction; there may also be a secondary southerly swell coming up from below the equator.

Swell height, period, and direction: The height of a swell is the height from trough to crest; the period is the time (in seconds) between successive crests or troughs, and the direction is the direction from which the swell comes. Let’s unpack a little:

Tide: On the open coast, the tide determines the depth of water that covers undersea rocks and reefs and can change the way surf behaves on a beach. For example, a swell that does not break on the reef south of Pillar Point at high tide may break there on a lower tide; and a beach that is shallow, with spilling surf, at low water may be steeper and dumpier at a higher tide. 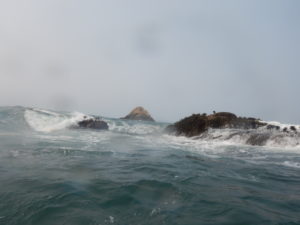