Find recorded meetings
and other videos on the BASK YouTube channel.

A Day with the Tsonoma Rangers

A fine Saturday morning, and I was off to the upper end of Tomales Bay for a coastal paddle. This was the day-paddle from Dillon Beach, across the mouth of Tomales Bay and down the coast to Bird Rock. Stopping on a highway overlook, I ran onto the “Tsonoma Rangers”, Mike Higgins and Roger Lamb. We surveyed the breaks on the many sandbars at the mouth of the bay. This looked interesting enough, and we’re the entire group, so off we go.

We launched into the two-foot nearshore surf, Mike on his lounge-on-top Scupper Pro, Roger in his Coaster, me in a plastic Looksha Sport and fully fortified with a double latte from one of the too-cute breakfast shoppes in Tomales.

With tidal currents near slack and beginning to ebb, we expected some outflow from the bay. And at eight to nine feet with mostly spilling break on top, the incoming swells looked even more interesting from water level. Undaunted, I hung with the Rangers (Dangers?), as we picked our way out and through the sandbars. Timing, timing and timing proved to be the essential factors again and again. We could relax and hang directly in front of a sandbar breakpoint and just watch the very regular breaks, wait for a low period in the incoming swells, then paddle briskly past the bar. Then hang in the swells between sandbars, and work our way past the next one. Crossing the mouth north to south and moving oceanward in this way, we played for most of an hour.

Finally we were free of the point at the south end of the mouth and rounded it on the swells, outside any breaking waves. Throughout this adventure of course we were within the notorious “Red Triangle” of great white shark territory and just at the reputed nursery for great whites. But the Tsonoma Rangers don’t pale at dangers, so we cleared the mouth and headed south, down the coast toward Bird Rock.

Bird Rock is massive, about 200 feet across, and rises 30 feet or more from the water, 100 yards off the beach. Adjacent rocks funnel the water and form a couple of good blowholes, spouting geyserlike with each sizable swell. We paddled past Bird Rock, then circled behind it into the wave shadow of calmer water, headed for a lunch break on shore. 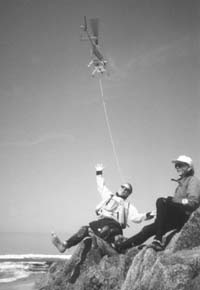 Suddenly overhead there was the chop-chop-chop of a circling helicopter. It dipped in a tight semi-circle, clearly checking us out. We proceeded with our casual landing, then looked out to see a Coast Guard ship and a Coast Guard airplane moving briskly along offshore. Wondering what the occasion was, we stared as the helicopter landed on the beach 40 yards from us, whipping up its own wind waves in the shallow waters. Out popped a commando-dressed rescue swimmer, complete with wetsuit, radio-equipped helmet, and rescue clips and lines.

Well, Sheriff Bob of the Sonoma County Sheriff’s Department greeted us with queries about our safety. Upon finding us unconcerned, he radioed for the Coast Guard rescue units to stand down. It seems someone had called in, reporting “three kayakers in distress at the mouth of Tomales Bay”! And not realizing we were in distress, we had paddled on for another 45 minutes or so until our would-be rescuers showed up, much to our amazement. Sheriff Bob told us he rescues abalone divers along that coastal area several times a year, sometimes following attacks by great white sharks. “This is said to be a nursery, but I’ve never seen a little one. They’re all big!” he said with a knowing look. When the chopper returned and lowered another sheriff on a long line, Sheriff Bob clipped himself onto the skyhook and went soaring off to practice rescue techniques above the cliffs behind us. Practice was over about the time we finished lunch. The chopper dipped its blades toward us, sounded its whistle, and the sheriffs waved as they zoomed away.

Better an available rescue, albeit unnecessary, than no rescue when you might need one!

Our return trip included surfing the swells, rolling in the soup zone, and generally playing in the sunny, beautiful mouth of Tomales Bay.

The Tsonoma Rangers cheated the great white sharks and other hazards again this time!

Back to Trip Reports