Find recorded meetings
and other videos on the BASK YouTube channel.

This is a very brief overview of some of the larger, more spectacular birds that can be seen locally while paddling.

Among the more spectacular birds I see while paddling are ospreys (pictured). These hawks with 5′ wingspans dive into the water from height, hunting fish, which they carry back to a high perch to eat. Opreys are common in summer, and rare in winter. They are easiest to see in Tomales Bay, along the Russian River, and anywhere along the coast north of Pt. Reyes.

Another famous raptor that can be seen kayaking is the peregrine falcon. This may be the fastest animal in the world, diving or “stooping” down on its shorebird prey at 180+ mph. Peregrines can be found where shorebirds are abundant, often perched on nearby cliffs. Drake’s Bay and northern Tomales Bay at Pt. Reyes are places where I have seen them. They are not limited to the wild, with two(?) pairs nesting on the Bay Bridge! One good way to spot these mid-sized hawks is to look around carefully for a dark, powerful falcon flying nearby whenever a large flock of shorebirds or waterfowl spooks into the air. A slightly smaller falcon which can be confused with the peregrine is the merlin which is present, although uncommon, in winter in areas frequented by shorebirds.

There are four main tern species in the area. They range from the tiny, endangered California least tern (pictured) hanging on to life at the Alameda Naval Air Station and the subject of controversy. The most common species year round is the Forster’s tern, a mid-sized tern. In summer, the large, gull-like, Caspian tern with its thick red bill can be found throughout the Bay. One pleasure of fall is seeing elegant terns in Monterey or the north San Francisco Bay. In the fall, Arctic terns can be seen on pelagic trips on their way from the Arctic to the Antartic. 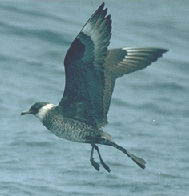 A close look will reveal that not all gulls are the same. In fact, there are seven different species of gulls in the area, each common in its microhabitat. These range from the small, tern-like Bonaparte’s gull to the large herring and Glaucous-winged gulls. In between are mew, Western and Ring-billed gulls. My favorite is the beautiful Sabine’s gull, which is only seen far offshore.

Resembling gulls, but far more interesting is the Pomarine jaeger (pictured) and its smaller relative, the Parasitic jaeger. Very powerful flyers, jaegers, and their large relative, the skua, are like the hawks of the sea. Jaegers are usually seen far offshore, but can come inside the Bay. In summer they are on the North Slope of Alaska eating lemmings, but in fall and spring they migrate past, making a living bullying terns and gulls on the wing to drop their catches. 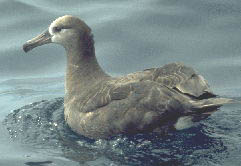 These are true pelagic birds, coming on shore only once a year to breed. They are abundant off-shore; I have seen 300 albatross and thousands of shearwaters on a single day on a bird-watching boat out of Monterey. The black-footed albatross (pictured) can be seen with luck from points that stick out in the ocean like Pt. Pinos, often following fishing ships.

Shearwaters, which superficially resemble gulls, are more closely related to albatrosses. The shooty shearwater which breeds only in the southern Hemisphere, may be the most abundant bird in the world. Other species that can be seen include: Buller’s shearwater, pink-footed shearwater, northern fulmar, and black-vented shearwater.

We are all familiar with the brown pelicans that are ubiquitous and pleasant companions on the Bay. Seen less often are the much larger white pelicans (pictured). Unlike brown pelicans, white pelicans breed on inland lakes in the Rockies, never dive from the air, and soar in large groups rather than skim the surface of waves. They can be found in fall and winter near the mouth of Tomales Bay and in the south San Francisco Bay.

There are three species of cormorants in the Bay Area. The Double-crested cormorant tends to stay near fresh water, the Brandt’s cormorant is the most common over salt water and the main species breeding at Bird Rock in Pt. Lobos. The Pelagic cormorant is smaller with a much narrower head. It is readily viewable along Cannery Row in Monterey.

Loons are quite common in the area. They are far more common in winter in their dull gray plumage, although a few can be seen year round. The most abundant species is the common loon (pictured with breeding plumage), but the Pacific loon and red-throated loon are also common.

There are five common species of grebes, often found close to harbors. The largest is the beautiful western grebe with its long white neck. Look carefully, and you will see some of these are in fact Clark’s grebe, a newly described species with a more orange bill and white on the face extending over the eye. The mid-size grebes, the eared grebe and the horned grebe are also common, but hard to tell apart. Finally, the smallest, the pied-billed grebe, seems most common in harbors or sloughs. Rarely, in winter, one can see the red-necked grebe; keep your eyes open between the Coast Guard breakwater and Cannery Row.

Paddling in Tomales Bay, I am often thrilled in winter with seeing flocks of black brant feeding on the turtle grass or flying overhead. They look like Canada geese, but are smaller, and lack the white throat patch.

Most of the ducks I see on the bay are surf scoters, the large black males have white patches on the back of their head and colorful bills that look like “mistakes with makeup”. Other common ducks include ruddy ducks, buffleheads, greater and lesser scaups, red-breasted mergansers, and canvasbacks. The Bay is the principal wintering ground for canvasbacks in the Pacific Flyway. Best to check with the Rare Bird Alert for the rarities. If one keeps one’s eyes peeled, it is occasionally possible to see the spectacular Harlequin duck (male pictured). I saw one in 1996 at Cannery Row. 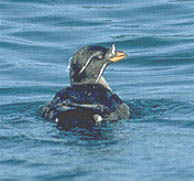 Puffins are the clowns of the sea with their circus-like faces and amusing antics. About a hundred tufted puffins breed on the Farallons, but tend to stay close to the island. A few are seen yearly in late spring or summer at the Pt. Reyes lighthouse.

Most kayakers don’t realize that the relatively common Rhinoceros “auklet” (pictured) is technically a small-billed puffin rather than an auklet. “Rhinos” are frequently seen in Monterey Bay in winter. They are almost guaranteed on pelagic trips.

Puffins and auklets belong to the Alcid family of birds, the Northern Hemisphere equivalent of penguins. Alcids are generally smaller than ducks, and usually flee by diving underwater rather than flying. Alcids include in addition to puffins: auklets, murres and murrelets.

The most common alcid here is the common murre. About 25,000 breed on the cliffs at Pt. Reyes. Murres feed on euphausiids by diving to depths of 600 feet, propelling themselves like other alcids by flapping their wings. Another common alcid is the pigeon guillemot with its startlingly red legs, often seen around Cannery Row.

Less commonly seen are ancient murrelets and marbled murrelets. Once, paddling off Davenport, I spent 10 minutes watching two ancient murrelets preen 20 feet off my bow. These tiny seabirds, bizarrely chose to nest at the top of old-growth redwoods! While still common in Alaska, they are threatened in California due to logging in old-growth forests.